This page contains a list of old projects that I have worked on, they are here just for archival purposes. I will talk about the projects in some depth, discuss some of the history, technical aspects and issues related to these building, deploying and marketing them. 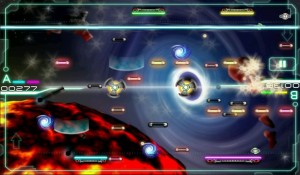 BattleBallz Chaos in action on the Blackberry Playbook

www.battleballz.com -BattleBallz Chaos is a fast paced 1-2 player revamp of classic games such as Arkanoid or Breakout, but completely re-designed to work with 2 players.

BattleBallz Chaos started its life as a simple learning exercise that I started years ago when I first began learning Silverlight (back when version 2.0 had just been released). I loved C# and wanted to test the viability of Silverlight as a smooth arcade gaming platform for web browsers. Turns out that Silverlight can more than handle fast paced arcade style games with tonnes of sprites. if you are interested in taking a look at our very early Silverlight prototype then go to http://battleballz.com/BattleBallzTestPage.html (Yes I know that my programmer graphics are a crime

Some time later, I decided to port the Silverlight web code base over to run on Windows Phone 7 as WP7 supports Silverlight (took me a single day to get it up and running). The game ran ok but initially had some performance issues which we eventually addressed.

Some time later we discovered the cross platform Marmalade SDK, so we set about building ground work gaming libraries on top of the Marmalade SDK. We used our gaming SDK to rapidly create BattleBallz Chaos from scratch, re-designing it for two players in the mix (this took a couple of weeks). We spent a few additional weeks tweaking the game and adding an achievements system that integrated into Facebook (thanks to Marmalades super easy to use Facebook extensions)

We have made many updates to BattleBallz Chaos since its release, including a tutorial mode, play balancing (lots of it) and bug fixes. Our most recent change was the addition of phases for 10 round modes in response to Blackberry Playbook user requests.

Whats the future of BatlleBallz? Whilst the game started out as a simple experiment we did discover that BattleBallz Chaos is not the type of game that your average smart phone user wants to play (the game hasn’t much of a hit in terms of sales). The game may be better suited for hard core gamers on platforms such as Nintendo DS or WiiWare, who knows, we may go that way with the game at some point in the future.

As a pet project, I would like to update the web version at some point in the future, adding HD graphics and updating the game play 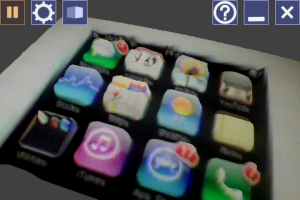 www.funkycam3d.co.uk – Funky Cam 3D is a fun piece of visualisation software. The app takes what the users live camera feed is seeing and converts the live images into a 3D mesh then adds depth (all in real-time)

Funky Cam 3D came about by accident, I was researching the Camera API that the smart cookies over at Marmalade created and was playing around with mapping the cameras live feed to polygons (I find stuff like that entertaining – yes I know that I’m a nerd!). I was actually looking into the possibility of creating augmented reality games. Anyway, during my tinkering I thought to myself, what would happen if I represented every pixel in the live camera feed with a polygon then stitched them all together into a mesh? I decided to give it a go, within a few hours I put together a nice viewing system that mapped each pixel in the live camera feed onto a polygon. At this stage the image was still flat so I decided that I needed to deform the mesh, but what could I use to deform the mesh?

Initially I had crazy ideas about creating an artificial intelligence that could examine the scene and pick out people, objects etc and create meshes of them complete with textures. After researching the methods involved I decided that there is no way that it could be done in real time so I abandoned the idea. instead I opted for the quick and simple method of using luminosity.

I quickly ran into speed issues when I deployed the test app to iPhone 3G because of the huge number of generated polygons, so I decided to produce a lower resolution filtered version of the live camera feed and generate the mesh from that, which worked quite well. I spent days on end going round everywhere looking at new things through the camera view with the newly added 3D depth.  Whilst I could not create perfect 3D images in many situations, some of the situations I could. Either way, the app was very fun to use.

Eventually I added lots of options to the app to allow the user to play around with how the program generated the 3D depth. The most fun thing I did do with the app was to draw on a piece of white paper. It looked like I was drawing in foam. I then inverted the lighting information and it looked like I was drawing mountains. You can see a video along with other videos showing off Funky Cam 3D on Pocketeers Limited’s YouTube channel at http://www.youtube.com/user/PocketeersLtd

We have put a number of updates for Funky Cam 3D including allowing users to pull photos from their photo reel to view them in Funky 3D as well fixed a number of crash problems on some Android phones. We still have issues with some Android phones and are currently attempting  to fix them. Once we have access to the camera API on Blackberry Playbook we will likely release a version for it. Beyond that we may produce a web version using Silverlight 5′s cool XNA rendering capabilities.

Being avid readers. we always liked the idea of reading books and magazines on phones and tablets, so we decided to create a system that would allow us to quikly put a book, magazine, newspaper or any kind of media for that matter on to a phone or tablet within a 24 hours. After much research and experimentation we eventually cracked it. This prompted Pocketeers Limited to start up its digital publishing service Print2App. If you are thinking of publishing media to a digital platform such as iPhone, iPad, Android, Bada, Blackberry Playbook etc.. them take a quick look

What’s the future of Print2App. We plan to continue supporting Print2App and extending our system to other platforms. We also plan on further streamlining our conversion system to become completely automated. We hope to offer the service for free with users paying a small royalty for its usage. 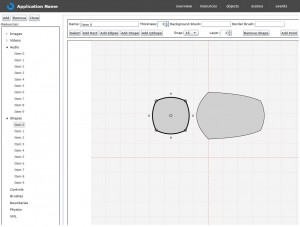 Like most things I name, the name doesn’t fully describe what MED is or aspires to be. I have always had a bit of an obsession with making games, tools and apps easier to make as well as helping none / casual coders create them. I have thought long and hard over the years on how to do this. As game and app development is a very large and complex subject and many people do not like the idea learning programming languages I came up with the idea of MED to simplify creation of multi-media based apps and games. The idea behind MED is that the user can put together art, video and audio assets and define animations These elements can then be tied together using a series of events and UI based script to make cool multimedia presentations or complete 2D games that can be deployed to any web site using Microsoft’s awesome Silverlight player. Before I ran out of funding for this project I managed to get frame based animations, video, audio and a basic vector editor together

Phase two of the MED project involves creating a player for the major smart phone and tablets such as iPhone, iPad, Android, Playbook, Bada etc.

Unfortunately we all have to earn our crusts to live thus MED is currently on hold until I can find the free time or funding to resurrect it! 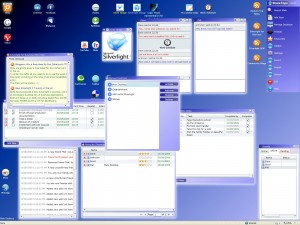 www.sharetops.com
Sharetops was my first huge scale ASP.NET and Silverlight project that I started a few years ago. Sharetops is defined as an extensible online web desktop sharing system with social networking elements, such as desktop sharing, web item sharing (items such as videos, images, schedules, to do lists), friends list, basic profile and real-time chat. Silverlight developers use a basic API to integrate their Silverlight based apps into the system, which can then be shared amongst users. Sharetops also features a search engine that users can add their web sites to as well as copy links from the search engine to their desktops. Users can also use Bing search to find items to add to their desktops. Lastly, the user can completely customise their desktops to create a cool interactive experience for their visitors. You can check out the Pocketeers Limited Sharetop here. The system took a lot of time and effort so its definitely worth taking a quick look at it.

Whats the future of Sharetops? The more advanced features of Sharetops can be a little intimidating to use and for those that can bare to sit and read through the tutorials the system is great. However, we want to rebuild Sharetops from the ground up to create new web  and phone clients that allows users to share their content over phones, tablets and PC / Mac. The system will be much more intuitive and versatile with integration into other media channels. 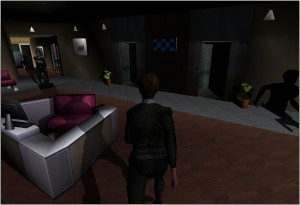 Some years ago I became fascinated with browser based games. At the time there didn’t appear to be any impressive  3D browser based games out there, Runescape was pretty cool but the 3D engine driving it wasn’t very impressive back then (it is much improved these days however). So I spent months of my spare time porting across the basics of Pocjketeers’ 3D engine technology to Java and Java Open GL (JOGL), which we were upgrading from Nintendo GBA and DS at the time.

I’ve worked on a mass of other things during my long career, in fact too numerous to mention so I will leave it here for now. I will post info about the cool projects I have been recently involved in very soon.