New here? What’s IwGame? IwGame is an open source free to use cross platform game engine for iPhone, iPad, Android, Bada, Playbook, Symbian, Windows Mobile, LG-TV, Windows and Mac, built on top of the Marmalade SDK. You can find out more and download the SDK from our IwGame Engine page.

Its been a tough week, my Apple Mac blew a gasket and refused to boot. Didn’t know this until I had spent 4 hours trying to make the Mac boot from Snow Leopard, but you cannot boot a Mac Mini from any version of the OS other than the original version that came with the Mac! Arrrgggghhhhh, insanity! In the end I turned my office and house upside down to find the original Mac disk.

Finally got cOnnecticOns cleaned up and submitted to the app stores. I also added 10 more levels and a game editor that allows players to create up to 20 of their own levels on-device and play them. I plan to allow sharing of these custom levels in a future version. We also added Facebook posting to IwGame and therefore has now been added to cOnnecticOns. You can find our more info about the game at http://appliter.com/apps/connecticons/connecticons.aspx

Ok, onto the update. IwGame v0.31 is kind of a special release because it contains the FULL source and assets of the game that you will see on Android Market and very soon Blackberry App World, Apple iTunes and SamsungApps for Bada.

As well as the release of the full source for cOnnecticOns, we also snook a few extra col bits and bobs in there.

The main purpose of this class is to allow the user to log into facebook and interact with it. Right know, only logging in and wall posting functionality is provided using the following method: 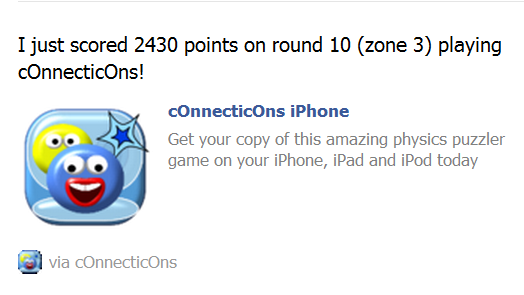 It is now possible to add a value onto an existing XOML variable using the new AddVariable action. You can also update a text actor with the value of a variable in XOML. Here’s an example showing how the editor in cOnnecticOns uses both actions together to create an up / down UI element that the player can use to change the number of cOnnecticOns available in the level:

Support for Android Back and Menu Buttons in XOML

It is now possible to attach actions in XOML to the menu and back button events in a scene by handling the OnKeyBack and OnKeyMenu events. Note that only the current scene will handle button events.

Using the new EnterValue XOML tag you can bring up the device keyboard and allow the user to input some text into a XOML variable.

As previously mentioned the full source to cOnnecticOns has been provided to enable developers to see a real working commercial game utilising IwGame. The first thing you will notice when looking at the code base is just how little code is actually there. This is because much of the mundane functionality such as creating layouts, handling events, creating animations, scenes etc.. are all handled by XOML. Please note that the supplied XOML is not optimised in way shape or form, in fact I have done many things long hand so as not to make the scripts convoluted and difficult to understand. When creating your own XOML you should probably focus more on re-use with templates, styles and global actions / animations etc..

Here is a brief overview of the provided XOML scripts:

Note that some files contain more than one scene. For example, each game level file contains the pause menu, the main game level scene as well as the in-game HUD. The pause menu and HUD exist as separate XOML files so they can be re-used across all levels.

The code base contains implementations of the following custom scenes:

The rest of the code is pretty bog standard stuff. Game is the implementation of CIwGame and contains initialisation and shut down. Probably the most interesting part is where the custom XOML classes and events are added using the following code:

These custom actions and events allow us to tie our game logic much closer to our XOML code.

Well that’s it for this update. We were aiming to get conditional XOML actions in for 0.31, but unfortunately it didn’t make it, but should do for 0.32.