Well, another busy day and as usual I have too much to do and there are only 24 hours in a day (I could do with coding and blogging on a ship travelling faster then the speed of light, so I can finish before I even started!). As usual if you just want the code then grab it from here. if you want the details then please read on

I’m getting quite excited about the tutorial series as we are finally building up to something much more useful than a simple bunch of loosely connected tutorials. That something is a “2D game engine” that will allow you to create cool fast games using the Marmalade SDK that you can deploy to a bucket load of platforms simultaneously and hopefully earn an even bigger bucket load of cash from!

Today we are going to begin our game engine by implementing one of the most basic components of a 2D game engine, The Sprite.

From our game engines point of view, we are going to define a sprite as a visual component that can move and animate on the users screen. I wont go as far as defining a sprite as a bitmap image because our sprites are special, they can be anything we define them to be. They can be anything from a simple point, line or bitmap to something as extravagant as a vector based image. We basically want to leave our options open and offer as much extensibility to our game engine as possible.

One very important point to make at this point. A sprite is only a visual component and should not be made to deal with game logic, collision detection, playing audio etc. It should only be concerned with drawing itself. Some people like this separation of concerns style programming but others (like me), whilst others do not.

Ok, so what do we want our basic sprite to do? Lets make a list:

CIwGameSprite – The mother of all sprite classes

Erm, put down that Marmalade SDK documentation, don’t let the name fool you, you wont find this class in there. I have named the class as such so that it feels more like its part of the Marmalade SDK.

Ok, we see that we have a bunch of properties for our sprite:

We also have a few private member variables in there that deal with the transform for our sprite. We covered the Iw2D transform in our Iw2D sprite example code in a previous tutorial. Note that building transforms can be expensive in terms of time when we are rebuilding lots of them every frame, so in our sprite class we only going to rebuild the sprites transform when the sprites position, scale or angle changes (no sense doing all that work if nothings changed).

Note that our Draw() method is a pure virtual method which makes the class abstract. This means that you cannot and are not supposed to create instances of this class. Instead it serves as an interface to defining classed based upon that class. Now thats said lets take a look at a class that we have derived from CIwGameSprite called CIwGameBitmapSprite.

CIwGameBitmapSprite – In Comes the Meat

Here is the class definition for CIwGameBitmapSprite:

As you can see we have derived CIwGameBitmapSprite from CIwGameSprite, basically borrowing all of its functionality and then adding on some more. This class now represents a visual component that is represented by a bitmap, or in this case a CIw2DImage.

You can see that we have added a few additional properties:

Ok, we now have a fully functional bitmapped sprite class that will allow us to draw bitmapped sprites to the screen. We can also spin, scale, move, hide and even change the colour or transparency of these sprites

I like to compare instantiated classes to children. if you allow them, they will misbehave and be difficult to manage. To help prevent your unruly sprites from misbehaving and crashing your awesome game, you need something to manage them, a common place to examine them, draw them and delete them when no longer needed (ok the comparison with children stops at that one!)

Ok, if you aren’t fond on collections / iterators and the likes then you probably won’t like this class very much. I will admit, i am quite obsessed with them. I find them “too” useful.

Ok, so this class provides some basic functionality: 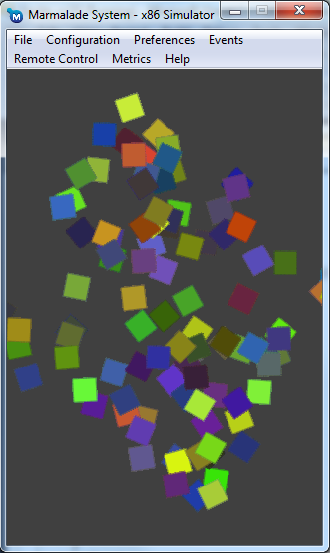 We have re-used the code from our previous Audio tutorial but ripped a few bits out of the main loop to clarify what’s going on.

Our first change involves creating a sprite manager and then adding some sprites:

Note that the code is a lot simpler than it looks. We are basically create 100 sprites giving each one a random position, random colour and alternative between two different bitmaps.

I want to point out here that using two separate images is bad practice as the underlying Iw2D render will need to switch states continually to switch between both images. To improve performance we would combine both images into a sprite sheet and then change the rectangular area within the image for each sprite.

Next we define a world transform matrix and world angle that we can modify on a per frame basis:

Now we do a bit of matrix math jiggery pokery to spin and scale our sprite manager:

We firstly reset our world transform using SetIdentity(), think of this as setting a variable to its default value. We then set the rotation, scale and translation that all sprites within the sprite manager will transform by. Note that we set the translation position to the middle of the screen because when we created our sprites earlier we defined their positions based around the origin being at 0,0 (top-left hand corner of screen). The world translation will move them back to the middle of the screen.

We now send the world transform to the sprite manager and adjust our world angle, so everything spins.

lastly, we tell our sprite manager to go away and draw its child sprites:

And finally before we exit the game, we delete the sprite manager which in turn deletes all of our sprites.

If you are wondering how we manage to spin a sprite individually as well as transform it by the worlds scale and rotation then open up IwGameSprite.cpp and take a look at CIwGameSprite::RebuildTransform()

As your projects get larger and more complex you will find that you are constantly creating and deleting many objects. The constant process of allocating and deleting objects can take its toll on the memory management system, which causes something called fragmentation. Fragmentation is when your available memory pool consists of many small chunks instead of a few large chunks. Depending on the memory management system in use, this can increase the overhead of allocating future objects and risk the chance of running out of memory even though the system is reporting plenty of free memory (this happens because there isn’t a large enough chunk of contiguous memory available to allocate).

To help alleviate this problem we can pre-allocate a large number of objects in one go instead of lots of little ones at random times during the game. This is usually called an object pool.

The problem with C++ is that it doesn’t work very well with object pools because:

We can get around the last two problems quite easily by emptying out our constructors and destructors and putting the code into Init() and Release() methods instead. This will allow us to setup and tear down objects without every having to recreate or delete them. Also, for certain types of objects (those that need to be reset to a default state) I like to add a Reset() method which allows me to set the object back to its original state.

The first problem is a lot more difficult to deal with, but the easiest solution is to simply create object pools for each type of object that you want to pool.

Pooling objects is as easy as allocating a bunch of them during game boot and then using some kind of marking system to mark them as in use or not in use. Instead of creating a new object you would simply search the object pool for a object that is not in use then reset it and use it. The only thing to do is to delete the object pool before you exit your game.

Well that’s it for this tutorial. Our next tutorial will handle adding frame based animations to our bitmapped sprite system which will allow us to truly walk the path of making a cool game.

Hope you all find this blog useful and until next time, don’t forget, dont read my blog at the wheel!