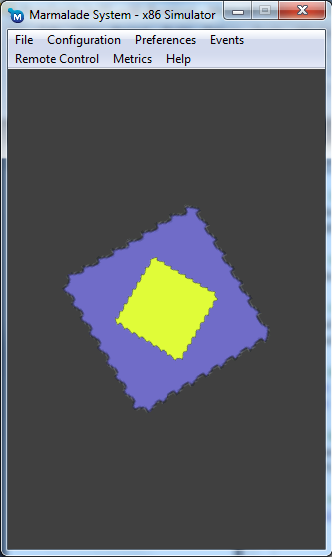 Ok, so you downloaded and installed the Marmalade SDK, took a quick scan over the help files and thought “Hmm, this is a biggy, where do I start?” When we start something new we all feel like complete and utter noobs. Al you want to do is get a “hello world” application up and running so you can have some kind of sense of achievement and feel comfortable with the process of updating code, compiling it and seeing it actually working. With this in mind, this tutorial will help you accomplish just that. On the other hand, if you just want the source code to the tutorial then you can download it here.

By the way, if you haven’t already done so then http://www.madewithmarmalade.com/download and grab a copy of the free trial version of the Marmalade SDK and install it.

We will begin with a few Marmalade basics so you don’t get lost during the tutorial.

To begin with, Marmalade uses the concept of project files to organise your source files, data files and deployment settings. The MKB file is basically a text file that when opened up will generate a Visual Studio or XCode project containing your source files etc.

The MKB file is split into a number of sections, each with a heading name followed by curly braces containing the sections data. Here’s an example of a section:

For now you only need to be concerned with the following basic sections of the MKB:

Ok, now we have explained a few things about MKB files, here is a very basic one to get you started:

To generate a project from this file you need to:

Now we are finally have the basics of creating a Marmalade SDK project out of the way, we now need something to compile and run.

In this section we will cover creating a very basic game loop that checks for the user quitting and clears the screen.

Ok, re-using the previous example, you need to edit the Main.cpp file that you created and add the following code:

If you build and run this example you will be presented with a grey screen. yes I know its a bit boring, but we will cover drawing sprites and other interesting topics very soon.